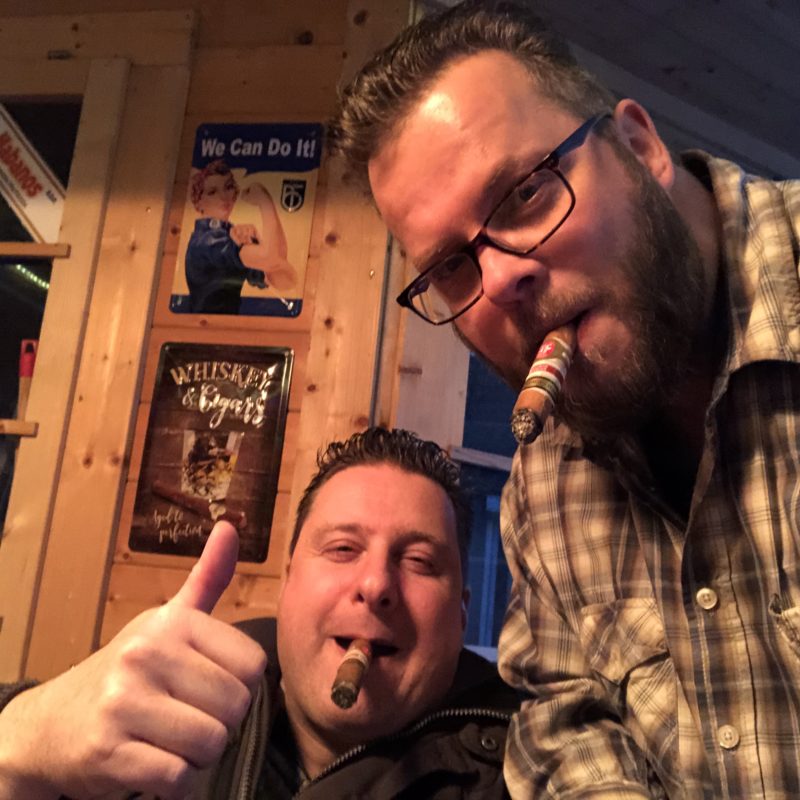 A long due weekend with good buddy Armand!

Hello all, it has been a while since posting,

This weekend was all about spending quality time with my good buddy Armand. We both know eachother for about 7 years now, and we became friends when back in the days the cigarforums where still functional. During the years we have spoken and seen eachother on numerous herfs and occasions and we always said when the agenda’s allign we should spend a weekend together, smoking cigars and having fun.

Well lthis weekend it was finally the moment to do just that! Friday afternoon Armand and his daughter Jessy arrived at our house and once they where all settled, we started to have a good chat about another hobby of ours wich is smoking a pipe. Since Armand is fairly new to this, i had to explain some basics and ofcourse we went through my humble collection of pipes and tobacco’s. While going trough my tobaccos, i found an opened tin of matured Escudo and i suggested to try that tobacco. Armand was inmediately, after smelling it, exited to join me!

So once we filled our pipes with this nice baccy and lit it, we enjoyed it thoroughly. After chatting and having fun the afternoon passed by fairly quick. Now was time to go outside to our little (man)cave  to light the KamadoJoe for a nice bbq-diner together! Meanwhile my lovely wife Irene prepped the table, and at the same time Armand and me focussed ourselves on the Kamado.

While waithing for the meat to get grilled we lit up a nice matured Fonseca Er Benelux to kill the waithing time accompanied by a few nice Cuba-Libres, the wife made. Diner was great, the food was perfect. We laughed and chatted all evening long, after diner we had a few drinks and I smoked a gifted Monte Cristo Robusto El2006 paired with a Calvados. Sadly the Calvados had a bit of medicinal aftertaste, what really surprised me, cause i never knew that Calvados could have this distinct taste too… Anyway as all good things come to an end it was time to go to bed!

After waking up, My wife and I prepared the breakfast and when Armand and Jessy came down we enjoyed the freshbaked rolls and bolied egg. Nothing beats a morning without a good breakfast.

After that Armand, Jessy and me went to the city to visit the local La Casa Del Habano, to enjoy a nice cigar. The wife stayed home to do some cleaning and other chores, after that she would also join us in the city. At the Casa we grabbed a good cigar and had a good long chat with the owners about all sorts of toppics and we had good fun while enjoying a nice cigar. Arround half past 12 my wife came to pick us up, for a lunch in town. At arround One we said goodbye and left for lunch.

We went to Bobby Beer, to have lunch and we enjoyed it all together, had good fun and a filled belly afterwards. After lunch, my wife and Jessy parted with us to do some shopping. Armand and me went home to go smoke another pipe and to go trough my collection of pipes and tobacco for the second time. While doing that, i filled up a couple off ziplockbags with tobacco samples for Armand to try later when home. As time passed, the women came home from their shopping and they had to show their buys. We had a couple of drinks that afternoon. As time went by it soon was time to go out again as i had reserved a table at the Greek restaurant Rhodos in town! We arrived punctual at 7 o clock. After we got our table we chatted and enjoyed the good prepped starters and afterwards the maincourse. With a good filled belly, we went home to go enjoy a final round of cigars. For this occasion i had sellected a Partagas Lusitanias from a 50cab. Once we sat down in the cave, we enjoyed the cigar and drinks… Always when having fun you seem to forget the time. When we finished the wonderfull “Lusi” we decided to go to bed as another day was well spent.

After a good sleep, we woke up and prepped the dinertable for the last good breakfast of our great weekend together. While eating we all looked back to the things we have done this weekend, we came to the conclusion it was really well spent and thoroughly enjoyed by all! After finishing breakfast it was time for Armand and Jessy to wrap up and leave, cause they still need a couple off hours to drive home. We said goodbye to eachother and they went on their way. The wife and i cleared the dinertable and after that i decided to go work on my Blog to write down what we did this weekend. So here i am to finally write about a little event we had this weekend, I hope you all like will like it!